It’s a glorious day for a StreetWalk … or a StreetScene … or taking a walk on the Sidewalk Side. I manage to get in right under the wire before this past week or so of brutally hot late May weather, so I can take my time studying the late-19th and early-20th century houses on the even side of the 3900 block of Chestnut Street. Bounded by Austerlitz on the east and Constantinople streets on the west, I’m in the Touro-Bouligny neighborhood just two blocks away from Magazine Street’s restaurants and shops.

Starting at the corner of Chestnut and Austerlitz, I’m greeted by a Craftsman double with blue weatherboards and bright red doors. There’s a front-facing gable on the left-hand side of the roof, balanced by a hipped roof on the right. The gable confers a bit more stature to the entry on the left. 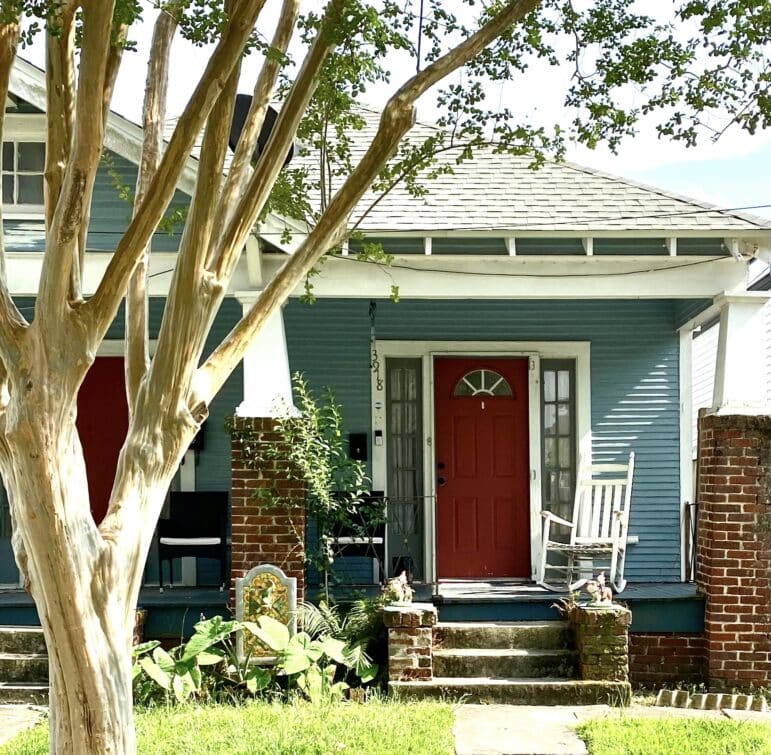 Craftsman double at Chestnut and Austerlitz

The requisite Craftsman-style elements are present, including exposed rafter tails, post brackets in the gable and tall brick pillars topped with short white flared columns that support the roof over the porch. The home’s charm is undiminished by the fact that it could use a little TLC.

Before I walk away, I spot an enchanting plaque made of hand-painted tile featuring a sea serpent or dolphin in relief on it, propped up on the ground smack in the middle of the house. And, what’s this? Two small statues of gnomes riding dogs? Since the dogs are red, I’m guessing this is a Georgia Bulldog family. Go Dawgs, sic ’em! 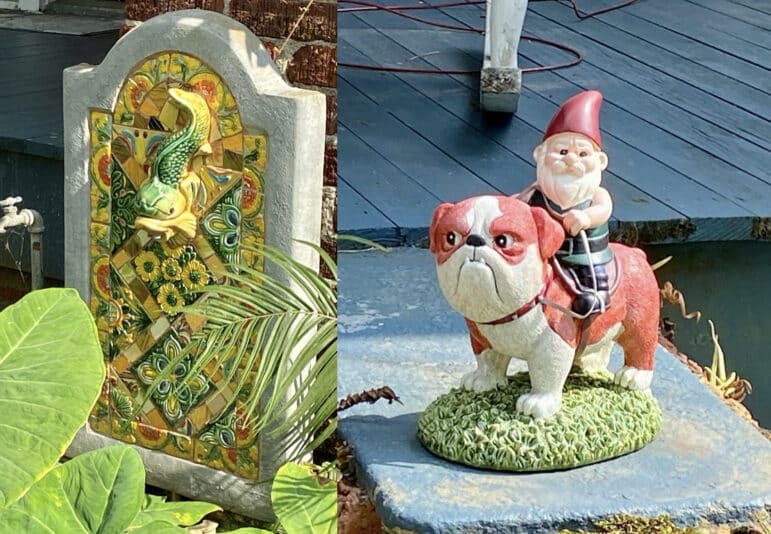 As I move on, I find myself in front of a gleaming white double in the Classical Revival style — it positively glows in the sunlight! The broad front-facing gable is filled with fish-scale shingles and features a pair of decorative attic windows having crisscross panes in the top sash of each and two panes in the bottom sash. The windows on the facade are equally fine and have diamond-patterned window panes as the top sash and a single pane on the bottom of each sash. 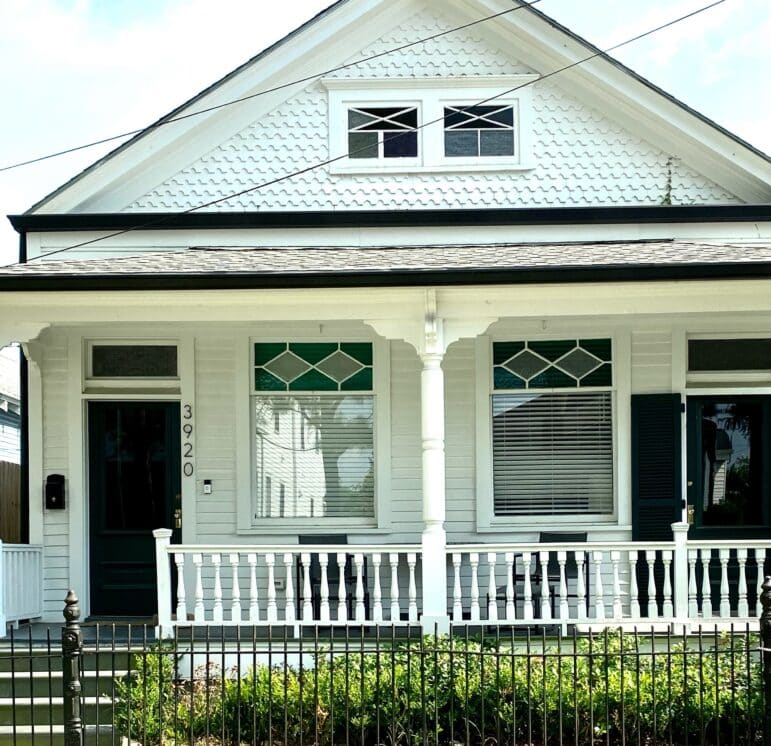 I encounter the only two-story house on the block as I move on. It occupies an exceptionally wide lot that provides abundant room for off-street parking and a deep and wide side yard. Were this my home, I’d have that lot filled to the brim with flowers and palm trees and banana palms and blooming shell ginger this time of year. These folks are not quite as overdramatic as I am, but their cheerful front garden features white agapanthus and a bed of yellow flowering plants. 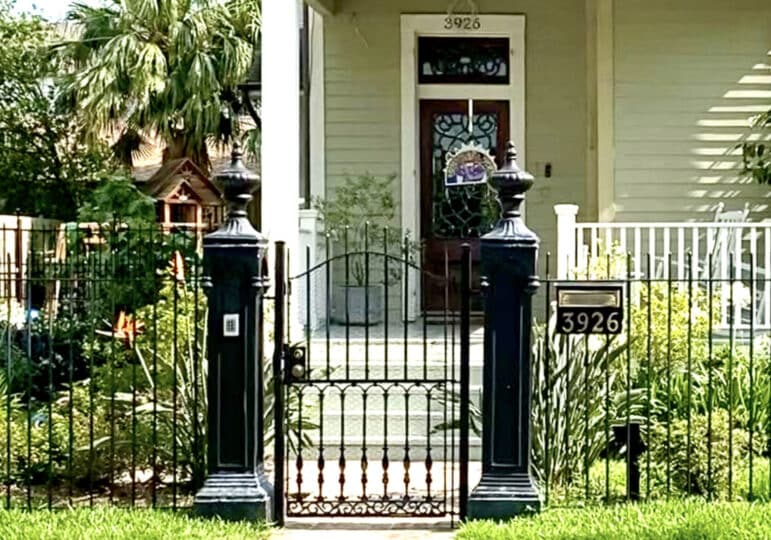 The house itself is a classical turn of the 20th century two-story home having fish scales in the front-facing gable, a recessed front entry, louvered shutters protecting the window on the right at the first level, as well as the entry door.

I notice as I walk away a pair of very grand gate posts, which makes me wonder if something still more glamorous might have stood there once upon a time. 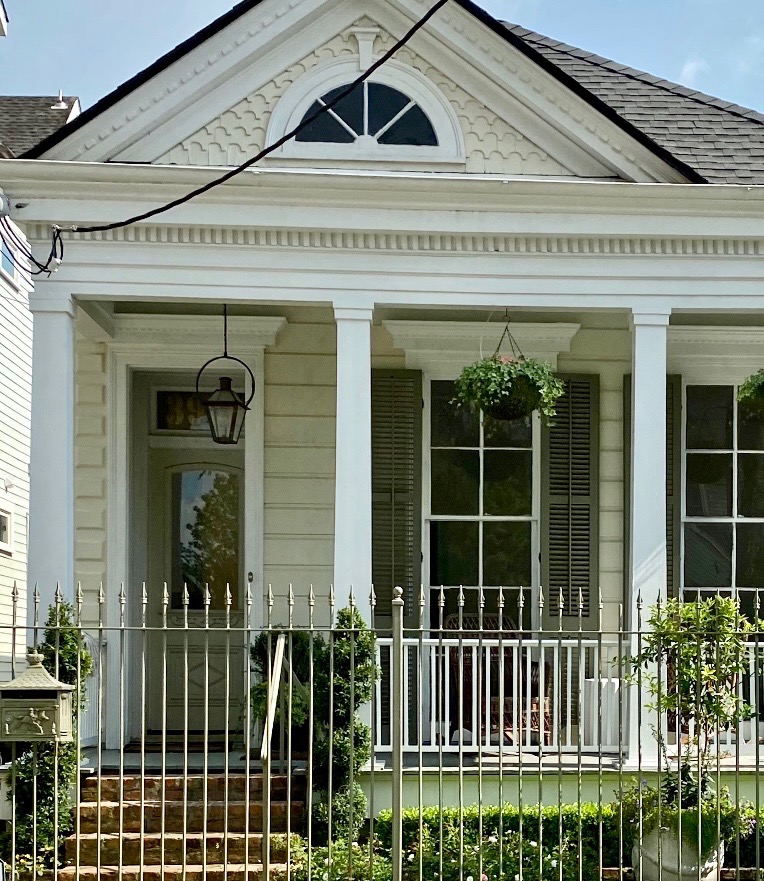 I move on to a three-bay single. I’ve learned not to call these “side hall shotguns” anymore (shotgun floor plans do not include hallways of any kind) even though it has the long narrow form of a shotgun house.

Another beautiful early-20th century Classical Revival home, this one has a demilune attic window in the front-facing gable. Complementing the columns that reach from the porch deck to its ceiling are a pair of true floor-to-ceiling windows, suggesting an interior flooded with sunlight. Jasmine engulfs a telephone pole nearby, filling the air with a heady fragrance that stays with me the length of my late spring walk. 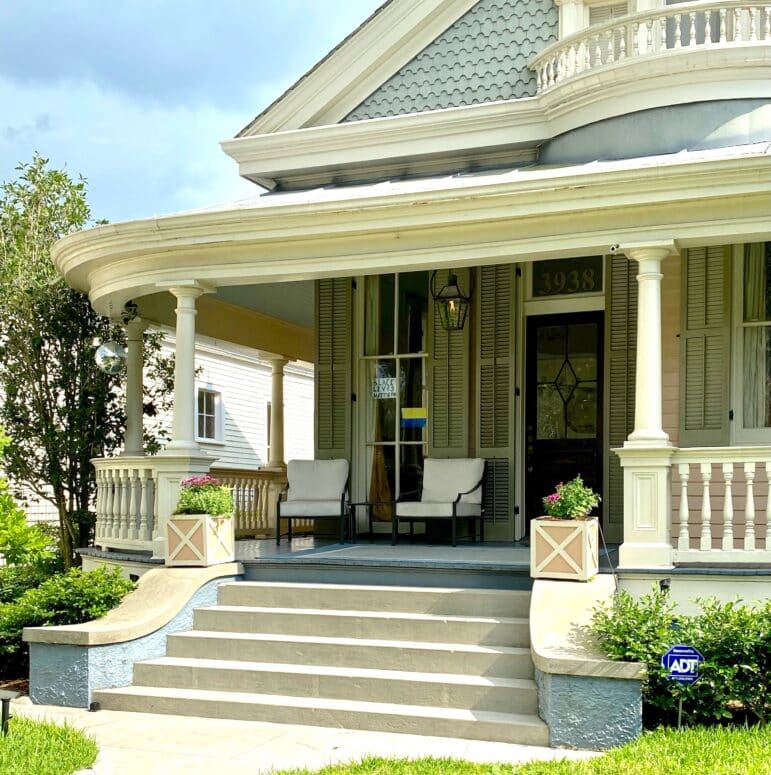 I have admired the next house on the block for many years. It’s a Queen Anne-style cottage with a wraparound porch, Palladian-style windows and a small balcony in the broad front-facing gable. I notice the roof over the porch is of standing seam metal rather than shingles. The porch has turned balusters and gently flared round columns on pedestals. Although the rioting hydrangeas catch my attention here, the whole package simply enchants me.

House number 6 is a double having floor-to-ceiling windows, louvered shutters, cornices over the windows, and round columns that extend from the porch decking to the roof over it. The house features a hipped roof with a dormer and attic window, plus a stylishly outfitted porch. There, chairs and black-and-white cushions offer a comfortable and shady spot for whiling away the afternoon hours. 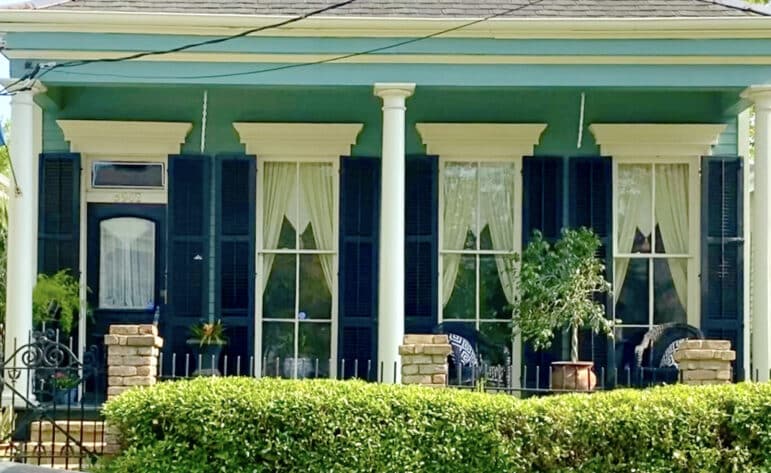 When I reach the final house on the block I find myself a little stumped. For one thing, it has six openings across the front, suggesting it may have once had two units, each with a side hall. On the right, there’s a porch with columns, a door and two floor-to-ceiling windows, plus a front-facing gable with a small attic window. 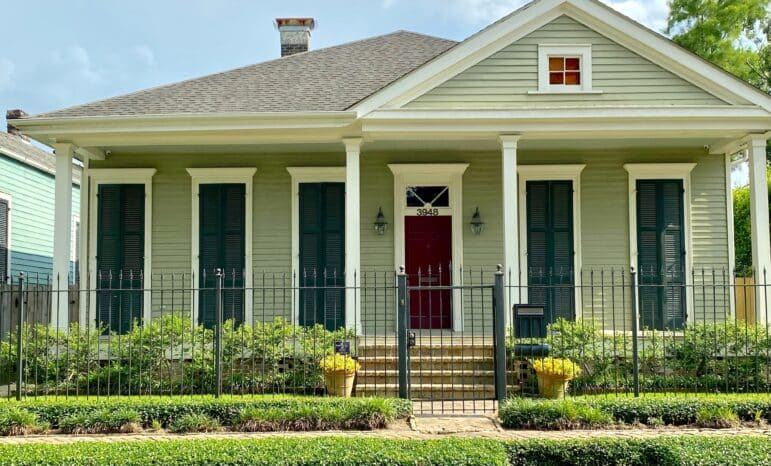 On the left, the roof is hipped, and there are three floor-to-ceiling windows covered by louvered shutters. Usually, I can tell the floor plan from looking at and analyzing the front of a building — but not here. Perhaps I will get an invitation to come inside at some time in the future?

It’s getting late and a little hot so I plan to leave, but not before I stop to admire the beautiful brick sidewalk in front of the house. This may seem like a strange element on which to focus my attention, but these bricks, installed in a chevron pattern, are the reason I started walking the streets to begin with. You won’t notice them driving by or even cruising past on a bicycle. You will only see them and be able to appreciate them by taking a walk — a walk on the Sidewalk Side.

New Orleans native R. Stephanie Bruno is a writer, architectural historian and real estate consultant. She is the author of “New Orleans Streets: A Walker’s Guide to Neighborhood Architecture” and serves on the city’s Historic District Landmark Commission. Her StreetWalker column appeared in The Times-Picayune’s InsideOut section. She can be reached at rstephaniebruno@gmail.com.