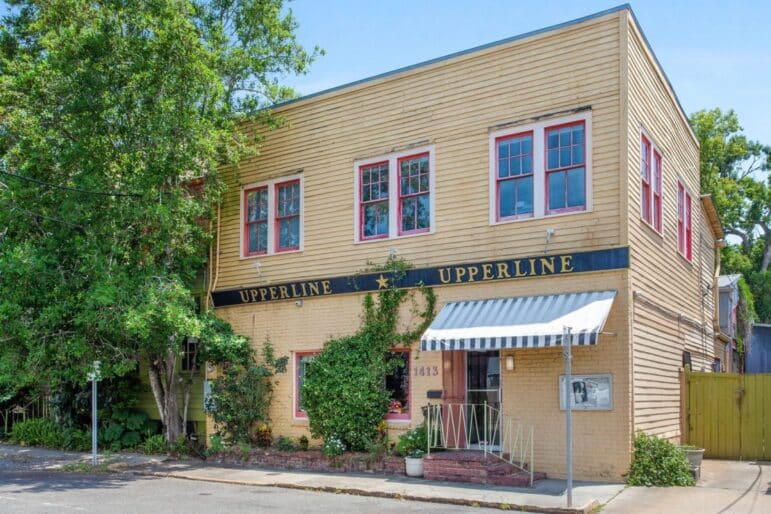 Corporate Realty announced last week that the beloved Upperline Restaurant is on the market. The owners — proprietor JoAnn Clevenger, her husband Alan Greenacre and their son Jason Clevenger — are selling the restaurant at Upperline and Pitt streets.

The art-filled restaurant known for its creative interpretations of Creole and Cajun standards served its last meal in March 2020. The owners announced in November 2021 that the restaurant would not reopen from the pandemic shutdown.

Clevenger, who is 83, told NOLA.com’s Ian McNulty in 2021: “We would sell Upperline with the name and the recipes, but I only want to sell to someone who is not going to damage what we built here; they could change it, but I have to trust they won’t damage it.”

The 4,293-square-foot property currently has a liquor license and is outfitted with fixtures, furniture and equipment, according to Corporate Realty. The property is listed at $1,725,000.

There are three dining rooms that contribute to the eclectic ambiance. The ground floor also features a small bar area, the kitchen, restrooms, and storage. The second floor has a large office, prep kitchen, wine storage room, and another room that can be used for storage or has the potential for expansion as a private event room.

“For over three decades, Upperline was one of the best, and most iconic, restaurants in New Orleans. Led by the legendary JoAnn Clevenger, Upperline combined an unmatched combination of exceptional food, a warm atmosphere, and a great location. While we are not offering the food, Corporate Realty is pleased to offer this one-of-a-kind building and location to the market,” said Michael J. Siegel, president of Corporate Realty, in a press release.

This property has been a restaurant under different owners for almost nine decades, but it began as a single-family home at 4836 Pitt Street in the 1890s.

In 1936 Salvaggio’s Restaurant opened in this location. It was also home to Martin’s and Kershenstine’s Barbecue before Clevenger came across the building.

Initially looking for a second location for her vintage clothing store, she instead hung colorful art by New Orleans artists and opened Upperline Restaurant in 1983 with her son, Jason Clevenger, as the first chef.

For almost 40 years, it was a fixture in the New Orleans culinary landscape, as much for its proprietor as it was for the fine cuisine and innovative dishes like Fried Green Tomatoes with Shrimp Rémoulade.

“I was always a big fan of the restaurant and have great respect for JoAnn and what she has accomplished,” said Corporate Realty agent Scott Graf, a former professional chef. “It is bittersweet, to be honest. I am sad to see it go, but excited to see what happens next in this winning location.”