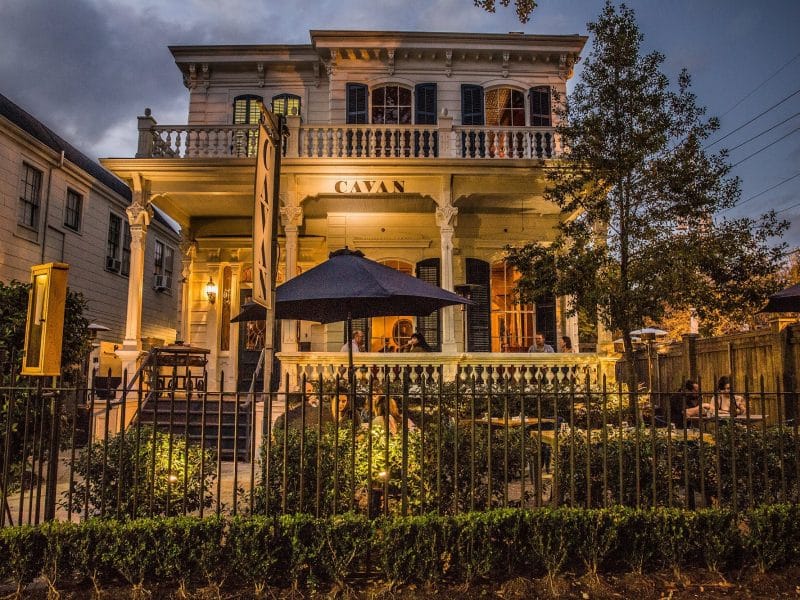 Robert LeBlanc of the local restaurant operator LeBlanc + Smith, which closed its Magazine Street restaurant Cavan in September, was one of the speakers at a press conference Thursday (Nov. 4) held by the Independent Restaurant Coalition.?

The association is urging Louisianians to call on local members of Congress — especially Sen. John Kennedy, who sits on the Senate’s Small Business and Entrepreneurship Committee — to refill the Restaurant Revitalization Fund, or RRF, part of the American Rescue Plan Act of 2021.?

“Restaurants are on the brink of extinction,” said Erika Polmar of the IRC, opening the press conference.?

LeBlanc said his locations have been struggling during the pandemic. “Three of my five places have closed, with 25 jobs lost,” LeBlanc said. “As an example, one of my restaurants had a 40-seat capacity indoors and with the restrictions of table distances and limited capacity, I could serve eight customers. This is not viable.”?

Cavan has become an event venue.

U.S. Rep. Steve Scalise faced his three Democratic challengers on Monday night in the first and thus far only debate of the fall Congressional elections, defending President Trump’s controversial tariffs against their criticisms of lost Louisiana jobs and explaining his ongoing opposition to new gun laws even after being shot. Scalise, the Republican incumbent in Louisiana’s First Congressional District, debated three challengers — Lee Ann Dugas, Jim Francis and Tammy Savoie, all Democrats — for an hour Monday at Loyola Law School before the Alliance for Good Government. Two other candidates have also filed to run against him, but Howard Kearney (a Libertarian) arrived late and only gave a closing statement, and Ferd Jones (running as an Independent) did not show at all. Based on fundraising and endorsements, Savoie and Francis are competing for the mantle of Democratic frontrunner to challenge Scalise. As of June 30, the most recent federal reporting deadline, Francis had raised $25,000 in contributions, Savoie raised $22,000, Dugas reported none and Scalise had a $1.9 million war chest.

U.S. Rep. Steve Scalise touted the virtues of civility and bipartisanship in Washington and his strong relationship across the aisle with Democratic colleague Rep. Cedric Richmond on Wednesday in New Orleans, even while simultaneously defending a President whose public insults and attacks on perceived enemies is the foundation of his personal style. Speaking at a lunch meeting of the Rotary Club of New Orleans at Harrah’s Hotel, Scalise opened his remarks by reflecting on the miraculous recovery that allowed him to return to the annual Congressional softball game a year after being shot there, then used his ballfield rivalry with Richmond to segue into a discussion of their ability to collaborate on major issues of importance to Louisiana. Coastal restoration, dredging the Mississippi River, funding new medical research, and most recently renewing the National Flood Insurance Program are all areas where the two have crossed party lines to ensure the passage of legislation that had stalled due to fighting within the Republican Party, Scalise said. “What you don’t hear about a lot in Washington is the times we work together, Republicans and Democrats, and especially the relationship that Cedric and I have maintained,” Scalise said. “I think it should serve as a reminder for how we should treat each other, the civility we should have, because there is a lot of vitriol in the language.”

Danae Columbus: Which party will control Congress after the mid-term elections?

“It could be a toss-up,” said former Congressman Bob Livingston when asked Monday if he thought the Republican Party would stay in power after the November 2018 mid-term elections. “I believe the GOP will remain in control, but I have been wrong on occasion. The Ohio congressional special election will be a good test of Republican strength.” Readers probably know that Republican Troy Balderson, 35, declared victory over Danny O’Connor, 31, after narrowly leading Election Day voting in Ohio earlier this week. The outcome could change — or not — after thousands of provisional ballots are counted. Livingston was one of many New Orleans-area Republicans to attend the funeral of former Councilmember Bryan Wagner, the first Republican to serve in that body since Reconstruction.

The difficult odds of upsetting U.S. Rep. Steve Scalise cannot be understated: the nationally-known Republican has never garnered less than two-thirds of the vote in his Congressional district. Nevertheless, Tammy Savoie is persisting. And, for the first time in what may be decades, Democrats in New Orleans believe they have found a candidate who can make the race for the seat competitive. “I think this is the first viable candidate in the First Congressional District in a long time,” said Bill Hammack, who hosted a fundraiser for Savoie on Tuesday that filled in the banquet room at Calcasieu in the Warehouse District. Savoie’s supporters are energized by her background, a Jefferson Parish native with a Ph.D. in psychology who served for decades in the Air Force.

When the first day of filing for the fall Congressional elections closed Wednesday evening, both incumbent U.S. Reps. Steve Scalise and Cedric Richmond had drawn three challengers apiece — with more possibly yet to come with two days remaining to qualify. Scalise — who represents Louisiana’s First Congressional District, which mostly covers the New Orleans suburbs but also a portion of the Audubon and university areas of Uptown — did not file his own paperwork on the first day of qualifying, although he has three days to do so. Three challengers for his seat did file: “Jim” Francis, a Covington Democrat, Howard Kearney, a Mandeville Libertarian, and Tammy Savoie, a New Orleans Democrat whose candidacy has already drawn some attention as part of the national progressive and #metoo movements. Richmond did file his qualifying papers on Wednesday for the Second Congressional District, which covers most of New Orleans and follows a jagged path up the Mississippi River to Baton Rouge.

Jared Brossett and Chelsey Richard Napoleon both officially declared their candidacies for clerk of Civil District Court, and Timothy David Ray and Austin Badon filed to run for First City Court clerk on Wednesday morning as qualifying began for the Nov. 6 special and Congressional elections. A special election is being held for Civil District Court clerk after longtime clerk Dale Atkins was elected to the Fourth Circuit Court of Appeal in the spring. Brossett is currently the District D City Councilman, and Napoleon was Atkins’ deputy and has been serving in the position since Atkins vacated it. Ray was likewise named to serve as First City Court clerk — which handles minor civil cases on the Eastbank of Orleans Parish — after the previous clerk Ellen Hazeur also won a judicial post this spring.

Members of the New Orleans Coalition gathered Uptown Sunday afternoon to discuss the fate of – and the impact of?– criminal justice reform legislation in Louisiana. Senator J.P. Morrell and Representative Royce Duplessis were on hand to recap the most recent legislative session and how each bill was successfully passed, as well as what issues will be front and center next year. Sarah Omojola, former Policy Counsel for Southern Poverty Law Center and current Director of the Welcoming Project, touched on the legislative process from an advocacy level. Mario Zervigon, of the Zervigon Consulting Group, moderated the panel. Both Morrell and Duplessis touched on how term limits will affect the new representatives’ learning curves, since the number of experiences legislators dwindle every year.

As an elementary school student attending PS #38 in Jersey City, New Jersey, this author has vivid memories of her school’s annual June 14th Flag Day celebration, where students whose families hailed from many countries paraded with their flags in a show of patriotism, hope and freedom. Americans should see plenty of those same feelings exhibited today as President Donald Trump (as well as House Minority Whip Steny Hoyer, former congressman Billy Tauzin, and Louisiana-born Facebook Exec Campbell Brown) celebrates his birthday and a re-invigorated House Whip Steve Scalise returns to the Nationals ballpark to take on the Democrats just one year after his near-fatal shooting. Scalise – whose new memoir is in the works – spent yesterday evening with Vice President Mike Pence, House Speaker Kevin McCarthy and others at a big dollar fundraiser at D.C.’s Trump Hotel which raised $3.2 million for vulnerable House Republicans. A highly sought-after speaker and rainmaker, Scalise has rightfully earned a tremendous amount of national press for his against-all-odds comeback which could well land him in the speaker’s chair. Trump, 74, the second most popular president among Republicans in this century, is not expected to attend tonight’s ballgame.

Danae Columbus: Scalise and Richmond scale their own party ranks while representing Louisiana together

Whether the Democrats or the Republicans controls Congress after the 2018 midterm elections, Louisiana will be a big winner because of what Rep. Steve Scalise (R-La.) calls the “great bond” him and Rep. Cedric Richmond (D-La.) enjoy. Scalise of course is the exceedingly popular Majority Whip who was shot June 14, 2017 during a practice session of the Republican Congressional baseball team. Richmond chairs the powerful Congressional Black Caucus, whose members represent the largest Democratic block. While Scalise and Richmond frequently agree to disagree on major issues – including President Trump’s recent decision to pull the U.S. out of the Iran deal – their goals are often the same. “We don’t differ on the end goal of helping the needy and protecting our citizens and caring for our elders.